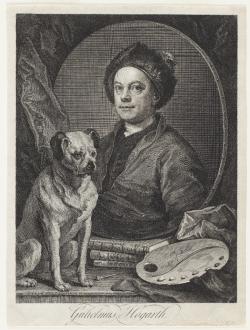 The Lewis Walpole Library is currently working to digitize and catalog its collection of over one thousand prints by and after William Hogarth (1697–1764), thus providing widespread access to these important holdings for scholars, students, and the public via Orbis and Quicksearch, the Yale University Library Catalog,  and the Library’s Digital Collections.

The library’s outstanding collection of prints by William Hogarth has been described by Ronald Paulson, author of Hogarth’s Graphic Works, as “unparalleled, at least in the United States.” These Hogarth collections were formed by W.S. Lewis and Annie Burr Auchincloss Lewis following on their primary interest in Horace Walpole (1717-1797), who himself had been an enthusiastic collector of Hogarth. In his biographical essay on Hogarth in Anecdotes of Painters, Walpole characterized the artist as “that great and original genius.” With this essay, Walpole included the first published inventory of Hogarth’s prints, based largely on his own collection. W.S. Lewis similarly came to think of Hogarth, after Walpole himself, as “a second subcontinent in the eighteenth century.”

The LWL’s holdings of prints by Hogarth are particularly deep and rich, with examples of rare early prints, trial proofs, early states, unique impressions, numerous copies and forgeries, and other ancillary material. Most notable among the Library’s holdings are two early collections, one compiled by George Steevens (1736-1800) and a second by Charles, eighth Lord Kinnaird of Inchture (1780-1826). Additional materials include a group of prints acquired from the New York dealer M.A. McDonald, and two collections comprising sets issued by Mrs. Hogarth: that of Frederick Edward Sotheby of Ecton, Northamptonshire (1837-1909), and a folio volume containing the collection of Queen Charlotte (1744-1818). Additional prints were acquired individually, including some from Horace Walpole’s own collection. 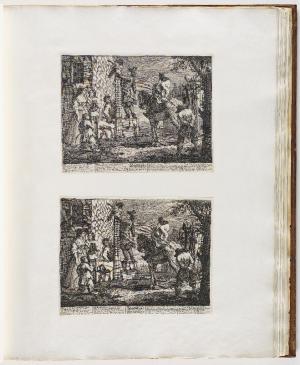 The George Steevens collection of 705 prints is exceptional in its inclusion of early items, rare and variant states of major series, tracings, copies, and other ancillary materials, all of which are mounted in three elephant folio volumes. This collection remains in its original bindings and is relatively intact but for some prints removed from the volumes and stored separately for preservation reasons. The volume pages are copiously annotated by George Steevens, who, with John Nichols, compiled an early catalog of Hogarth’s prints that was published as part of The Genuine Works of William Hogarth. The collection includes a loose list in Steevens’s hand designating prints “published in ridicule of Hogarth” and those “not to be reckoned as the work of Hogarth.” Steevens’s collection, together with that of Nichols’s (now at Cambridge), formed the basis of their early cataloging efforts. Ronald Paulson used the Steevens collection as an important resource in his definitive catalog Hogarth’s Graphic Works.

View the Orbis records for works in the George Steevens Collection

View the Orbis record for the volumes 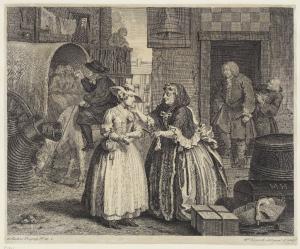 Charles, eighth Lord Kinnaird of Inchture (1780-1826) was a politician and notable art collector. His Hogarth collection includes 220 prints, including many early states and a unique impression of the fourth plate from A Rake’s Progress retouched by the artist. Purchased in Kinnaird’s original binding with his bookplate on the inside cover, the collection was disbound in 1984 by conservators at Sterling Memorial Library. The original boards with Kinnaird’s bookplate were preserved and remain at the Lewis Walpole Library. An inventory of the prints records the order and layout of the prints before they were removed from Kinnaird’s volume.

The Kinnaird collection was acquired in 1940 from the Edinburgh bookseller John Grant for £20.

Browse Orbis records for works in the Kinnaird Collection 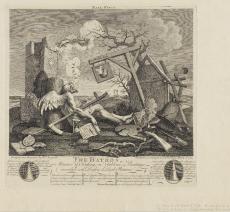 Among the earliest Hogarth prints to enter the Lewis Walpole Library collection is a group of thirty-nine prints bought from the New York dealer M.A. McDonald in 1941 for a lot sum of $600. A note on an early inventory list indicates that these prints were individually mounted, but vestigial evidence of sewing suggests that they were once bound in a volume.

Browse Orbis records for works in the McDonald Collection, 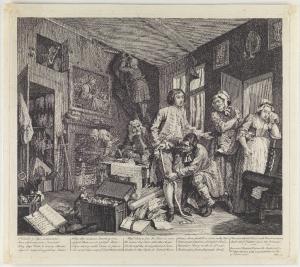 This collection of ninety-seven engravings is a fine example of the sets of prints, often bound, that were issued by the Mrs. Hogarth. After the artist’s death in 1764, his widow carried on a lucrative business offering prints to satisfy a mania for Hogarth collecting. Many of the prints are later states or reissues but are generally fine impressions.

The Sotheby Collection was formerly the property of Frederick Edward Sotheby of Ecton, Northamptonshire (1837-1909). It was sold as lot 251 in the Sotheby’s sale of November 21, 1955, where it was acquired for Lewis by Maggs Bros. Ltd. at the “very reasonable figure of £11.” The prints were removed from the original volume in 1984 by conservators at Sterling Memorial Library. An inventory records the original appearance of the prints, and the binding is preserved at the Lewis Walpole Library.

Browse Orbis records for works in the Sotheby Collection

Like the Sotheby collection,  Queen Charlotte’s Hogarth prints are a further fine example of sets of prints put together and offered by Mrs. Hogarth after her husband’s death. This collection of eighty-four prints remains in Her Majesty’s three-quarter calf binding with marble boards.

Queen Charlotte’s collection was purchased at the sale of Miss M.A.E. Crofton at Sotheby’s on November 15, 1960.

View the Orbis record for the Queen Charlotte’s Collection

The album of William Hogarth prints was gifted to the Lewis Walpole Library in May 2015 by Richard Greenberg. Detailed at the links below is the journey the album undertook to become a part of the library’s collection and an invaluable resource for scholars and researchers studying William Hogarth.

The Hoadly Folio by Richard Greenberg

View the Orbis record for the Album of William Hogarth Prints

In addition to the collections of prints, the library also holds important manuscripts and other primary resources connected to William Hogarth. These include:

finding aid for prints after hogarth

The Lewis Walpole Library Collection of Prints after William Hogarth contains more than 500 eighteenth- and nineteenth-century etchings and engravings that reproduce the works of William Hogarth.

III. Dangerous Sketching: Hogarth at the Gate of Calais and other Artists Suspected of Spying with Dr. Ulrike Boskamp

II. “The Five-Day Peregrination:” a dizzy journey through the topographical history of Kent with Professor Caroline Patey and Dr. Jacqueline Riding

I. Decolonizing Sámi Representation and the Legacy of Colonial Topographies with Joar Nango and Dr. Mathias Danbolt

Hogarth’s Legacy, edited by Cynthia Roman, (2016) published by the Lewis Walpole Library and distributed by the Yale University Press.