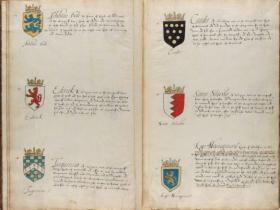 Well known for the approximately 3000 letters to and from Horace Walpole and a further 3000 photostats and transcripts of letters from other collections which together have been published in the Yale Correspondence, the library also holds other manuscript materials by or related to Horace Walpole. Among them are manuscript copies of Aedes Walpolianae and the Mysterious Mother, as well as Walpole’s Commonplace Books (I, II, and III), Books of Materials, and many books and examples of graphic art bearing annotations in his hand.

Also included in the holdings are account and receipt books, bills and other documents of household and merchant establishments, as well as travel diaries and poems. Among the literary manuscripts is Louis XVI’s autograph manuscript translation of Horace Walpole’s Historic Doubts on the Reign of Richard III. The library also holds a ten-volume collection of mostly Italian music manuscripts compiled by Thomas Gray.

Other manuscripts include significant holdings of: 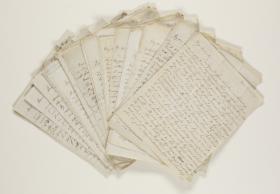 Finding Manuscripts and Archival Material in the Library’s Collection

Although only a portion of the collection has been cataloged in Orbis, the Yale University online catalog,  and Quicksearch Books+, including most bound manuscript volumes and recent acquisitions, the rest is accessible through a number of card indices and unpublished finding aids at the library in Farmington.

Several manuscripts, printed texts with marginalia, ephemera, and objects have been digitized and are included in the Library’s Digital Collections. View digitized manuscripts and related material.

The manuscript collection has been described in several articles in the Yale University Library Gazette listed below. *Please note these articles are from JSTOR and only available to the Yale community.

THE MANUSCRIPT COLLECTIONS AT THE LEWIS WALPOLE LIBRARY

Archon Directory: Manuscript holdings as of 2004 are also noted under the indexes of the National Register of Archives in the UK, and the library is listed in the Archon Directory.

Walpole’s manuscripts, including those held at the Lewis Walpole Library, are also indexed in Index of English Literary Manuscripts