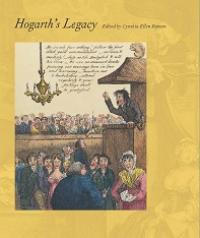 Hogarth’s Legacy, edited by Cynthia Roman, was published in 2016 by the Lewis Walpole Library and distributed by the Yale University Press.

William Hogarth (1697–1764) is among the most celebrated painters and printmakers in the history of British art. While scholars have long recognized Hogarth’s substantial influence as part of their larger studies of his life and art, Hogarth’s Legacy sets out to focus multidisciplinary inquiry for the first time on the artist’s afterlife in Britain and internationally. Distributed by Yale University Press. You may purchase Hogarth’s Legacy at yalebooks.com. 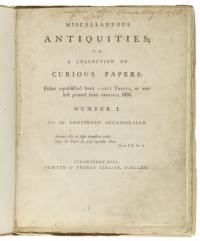 In 1772 Horace Walpole published two issues of Miscellaneous Antiquities, both in editions of 525 copies. He intended to satisfy what he gauged to be a general “taste for anecdotes and historic papers, for ancient letters that record affairs of state, illustrate characters of remarkable persons, or preserve the memory of former manners and customs.” Walpole’s admirable plan was to publish entertaining original manuscripts and printed pieces, “now little known,” from his own and his friends’ collections. He over-estimated the public’s capacity for such amusements, however, as he wrote to his friend Mason in March 1773: “The Miscellaneous Antiquities have not sold above a fifth of them, so there will be no more.”

In 1927, as he recalls in Collector’s Progress, W.S. Lewis had the temerity to resume Walpole’s short-lived series. He was confident that the present taste was “identical with that of 1772” and would embrace antiquities of the sort to be found in his library. As it happened, the first three numbers of Lewis’s Miscellaneous Antiquities resulted in almost the same disappointing sales as did Walpole’s: from editions of 500 copies, only about 130 were sold. Lewis’s response was not to abandon the project entirely but to carry on with the series until 1940, privately printing what he calls “odds and ends” from his collection in small editions as Christmas keepsakes.

15. The Impenetrable Secret, probably Invented by Horace Walpole. An Explanation of the Secret. With a Note on the Original by W.S. Lewis. Farmington, Conn.: Privately printed, 1939. [100 copies]

Given this history, it may appear foolhardy to launch a second revival of Miscellaneous Antiquities. Nevertheless, the presence in The Lewis Walpole Library’s collections of materials that are unknown, or known only to few scholars, has encouraged the present Editor to resume the series. Scholarly approaches to the eighteenth century have shifted since Lewis set out to build on Walpole’s project, to be sure, but the value to scholarship of primary sources is if anything clearer now than it was in the 1920s.   – Margaret K. Powell

17.”The Production of a Female Pen”: Anna Larpent’s Account of the Duchess of Kingston’s Bigamy Trial of 1776. A facsimile edition, transcribed and with an introduction by Matthew J. Kinservik. New Haven, Conn.: The Lewis Walpole Library, Yale University, 2004. 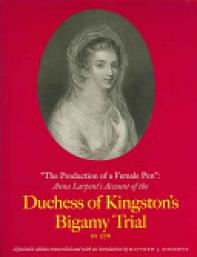 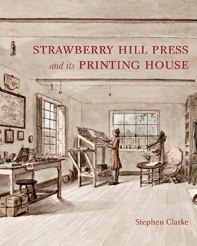 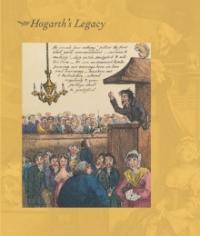