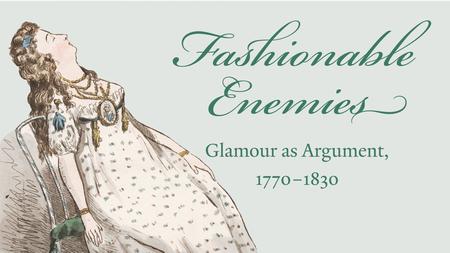 Joseph Roach will deliver a keynote lecture in association with the opening of the exhibition Artful Nature: Fashion and Theatricality, 1770-1830, on view February 6 to May 22, 2020 at the Lewis Walpole Library in Farmington, CT. The exhibition is co-curated by Laura Engel, Professor of English, Duquesne University, and Amelia Rauser, Professor of Art History, Franklin & Marshall College.

Between 1770 and 1830, both fashionable dress and theatrical practice underwent dramatic changes in an attempt to become more “natural.” And yet this desire was widely recognized as paradoxical, since both fashion and the theater were longstanding tropes of artifice. In this exhibition, we examine this paradox of “artful nature” through the changing conception of theatricality during these decades, as mirrored and expressed in fashionable dress. Theater and performance practices in the late eighteenth-century, including the vogue for private theatricals, reinforced the blurred lines between the theater and everyday life. Classical sculpture became a reference point for women, as its artistic excellence was acclaimed precisely because it seemed so “natural.” But when actresses, dancers, painters, or just regular fashionistas posed themselves as classical statues come to life, they acted as both Pygmalion and Galatea, both the genius artist and the living artwork. “Artful Nature” refers simultaneously to the theatricality and deception typically attributed to fashionable women in the late eighteenth century, and at the same time to the potential survival strategies employed by women artists, authors, and actresses to craft their own parts.

Under the direction of Laura Engel, a performance based on Mary Berry’s Fashionable Friends, acted as an amateur theatrical at Strawberry Hill in November 1801, is planned for May 15, 2020 in the newly restored eighteenth-century Cowles House on the campus of The Lewis Walpole Library in Farmington, Connecticut. 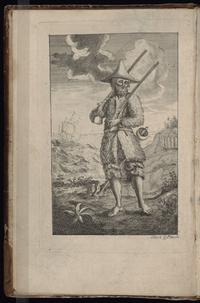 The Lewis Walpole Library, the Beinecke Rare Book and Manuscript Library, and the English Department of Yale University, are pleased to host this mini-conference, led by Jonathan Kramnick, Maynard Mack Professor of English, focusing on the Defoe / Robinson Crusoe tercentenary and the 18th-century novel. 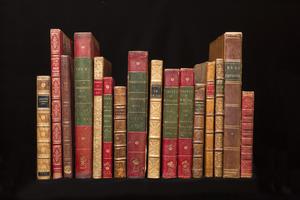 Clarke, a Successor Manager on the Board of Managers of the Lewis Walpole Library, will speak on “’Lefty’ Lewis and the Waldegraves: Collecting, Obsession, and Friendship” in the 2019 Adrian Van Sinderen Lecture.

This event is open to the public.

by Stephen Clarke, Curator of the Lewis Walpole Library’s 40th anniversary exhibition, Rescuing Horace Walpole: The Achievement of W.S. Lewis, and Honorary Research Fellow of the University of Liverpool 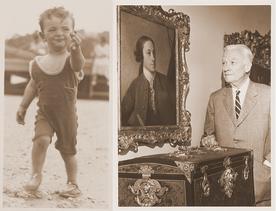 by: Stephen Clarke, Curator of the Lewis Walpole Library’s 40th anniversary exhibition, Rescuing Horace Walpole: The Achievement of W.S. Lewis, and Honorary Research Fellow of the University of Liverpool

To mark the fortieth anniversary of the gift of W.S. Lewis’s house on Main Street and his collection to Yale University, the Lewis Walpole Library has mounted an exhibition Rescuing Horace Walpole: the Achievement of W.S. Lewis’. On Monday October 28 the exhibition’s curator, Stephen Clarke, will give a talk on the story of Lewis’s collecting; how it was driven, the skills he deployed, and the web of friendships, archives, scholars, and acquisitions that converted a young bibliophile Farmington resident into an internationally recognized figure, and permanently linked Farmington to Yale University.

The talk is presented in collaboration with the Farmington Libraries.  Space is limited and registration is required. 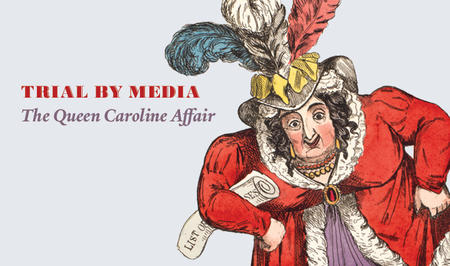 Presented in connection with the Trial by Media: The Queen Caroline Affair exhibition on view at the Lillian Goldman Law Library.

Panel: Law, Lawyers and the Queen Caroline Trial
Cristina S. Martinez, Adjunct Professor in the Department of Visual Arts at the University of Ottawa, chair

Jennifer Tucker, Associate Professor of History, Wesleyan University
Queen Caroline and the Sexual Politics of Popular Culture and the Law in Georgian England

Scholarly Editing of Literary Texts from the Long Eighteenth Century 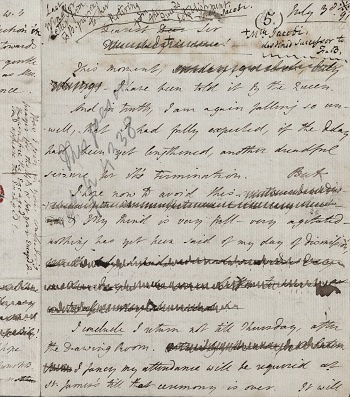 This program has emerged from the preparation of the forthcoming exhibition, Rescuing Horace Walpole: the Achievement of W.S. Lewis, which will be on view at the Lewis Walpole Library September 2019 – January 2020. The exhibition addresses the scope and function of Lewis’s collecting and the way it fed into the editorial project of The Yale Edition of Horace Walpole’s Correspondence (1937–83), of which he was General Editor. Given Yale’s association with the recently completed edition of the works of Samuel Johnson (1958–2018) and the ongoing work of The Yale Edition of the Private Papers of James Boswell (1950―), it is an appropriate venue for a symposium on the editorial issues and the future of scholarly editions of the collected works and correspondences of British writers from the long eighteenth century.

The impact of digital resources, issues of funding and readership, and the fact that there are several major editions just reaching completion and a number just commencing, make this a fitting time to reflect on the history, present state and future prospects of these editions.  The edition of the journals and letters of Frances Burney, for example, which had to battle with manuscripts such as that here illustrated (courtesy of the Berg Collection, New York Public Library) has been completed this year. Approaches to use of copy text, attribution, normalization of text, levels of annotation and comprehensiveness of indexing, have varied over time and between (and in some cases within) editions. New editions are being planned making use of digital technology that was never available to the Yale Walpole, and only became available to more recent editions for their later volumes. The editions now being planned for the Cambridge Aphra Behn and the Oxford Pope will have these resources available to them from their inception.

Scholarly editions are fundamental to the development of scholarship for their respective authors, and their shelf-life is far longer than for many other academic texts. They provide the authoritative and annotated text to which readers and scholars ultimately refer, and the research required to produce them often results in the discovery of additional manuscript material or other bibliographical evidence, and the reconsideration of questions of attribution. This symposium will provide an opportunity to consider their past achievements, current issues in methodology and production, and their future prospects.

The program will consist of two panels of three speakers each; all but one of whom are General Editors of their respective editions. The speakers will prepare presentations of 25 minutes each, leaving the remaining 30 minutes of each panel session for questions and answers and discussion.

Registration is requested for catering and space-planning purposes.

The Lewis Walpole Library is delighted to support the ISECS Congress 2019, being held Sunday, July 14 through Friday, July 19 in Edinburgh. The Library is sponsoring the grand reception and two panels. Look for us also at the Publishers’ Showcase in McEwan Hall where we will have a table along with Yale University Press who will be featuring the publications from the Lewis Walpole Series in Eighteenth-Century Culture and History. See you in Edinburgh! 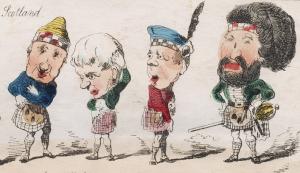 All congress attendees are invited to the Grand Reception in the stunning Grand Gallery at the National Museum of Scotland, Chambers Street, just a few minutes’ walk from the university. Doors open at 6 pm and wine and canapes will be served to the accompaniment of traditional Scottish pipers. 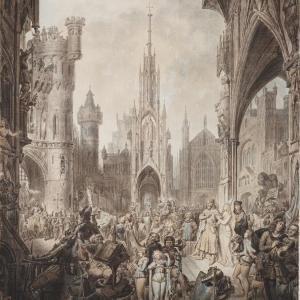 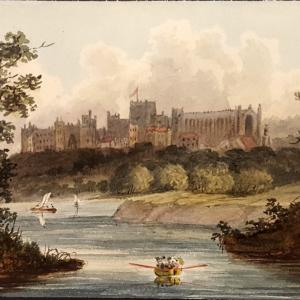 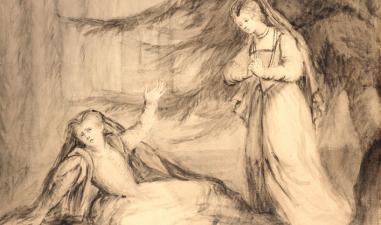 Cheryl Nixon, Associate Professor, Department of English, University of Massachusetts, Boston, ”The Mysterious Orphan: Dramatizing the Betrayal of the Child”

David Worrall, Professor Emeritus, Nottingham Trent University, “ ‘I beg you would keep it under lock and key:’ the Mystery of the 1821 Mysterious Mother performances” 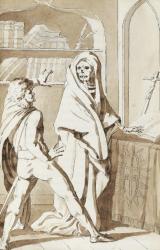 As part of our celebration of Horace Walpole’s tercentenary this fall, the Library hosted a mini-conference on Walpole’s “The Castle of Otranto”. Organized by Jonathan Kramnick, LWL Faculty Director and Maynard Mack Professor of English at Yale, the program consisted of short paper presentations by panelists led by a moderator followed by lively discussion with an audience of other panelists, faculty, and graduate students.

The mini-conference was video-recorded, and the recordings are available on the Yale Youtube channel: Morning and Afternoon.

Global Encounters and the Archives: Britain’s Empire in the Long Eighteenth Century 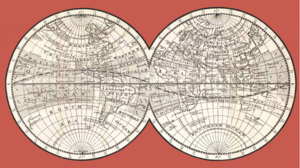 As part of the Lewis Walpole Library’s celebration of Horace Walpole’s tercentenary and the 100th anniversary of W.S. Lewis’s Yale class of 1918, the library is working with Steve Pincus, Bradford Durfee Professor of History, Yale University, to organize a two-day conference on Friday and Saturday, February 9 and 10, 2018, to consider how current multi-disciplinary methodologies invite creative research in archival and special collections at the Lewis Walpole Library and beyond. Planned thematic sessions include “What is Empire?,” “Conceptualizing Political Economy,” “Slavery,” “Indigenous Peoples,” “Diplomacy,” and “Material Culture.” This conference is organized in association with the exhibition, Global Encounters and the Archives: Britain’s Empire during the Age of Horace Walpole.

The conference will be held at The Graduate Club, 155 Elm Street, New Haven Connecticut 06511. For directions to the club and parking information, please see their website.

Register for this event

Lecture: Global Encounters and the Archives: Britain’s Empire in the Age of Horace Walpole 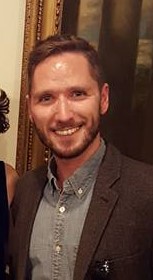 Justin Brooks, Doctoral Candidate in History, Yale University, will speak on the the Lewis Walpole Library’s exhibition “Global Encounters and the Archives: Britain’s Empire in the Age of Horace Walpole.” The exhibition, which looks at aspects of the global British Empire in the long eighteenth century, takes full advantage of the diverse range of archival resources held by the Library and which Mr. Brooks co-curated, including manuscripts, printed texts, graphic images, and objects. Interrelated themes include political economy, diplomacy, indigeneity, and slavery. The talk, exhibition, and other related programs celebrate the broad pre-disciplinary collecting activities of Horace Walpole (1717-1797) and W.S. Lewis (1895-1979) and will explore how current multi-disciplinary methodologies invite creative research in the Library’s archival collections. Mr. Brooks’s talk is offered as part of a year’s worth of events celebrating the 300th anniversary of Horace Walpole’s birth.

This Lewis Walpole Library lecture is held in partnership with the Farmington Libraries.

Lecture: The Many Lives of Horace Walpole 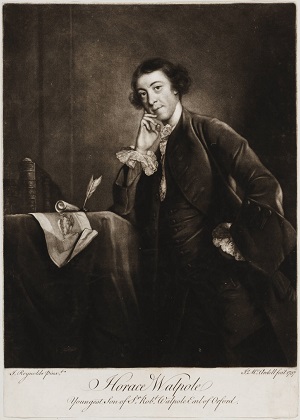 In his charming biography of Horace Walpole, R.W. Ketton-Cremer makes the point that “one of the difficulties which confront a biographer of Walpole is his remarkable versatility.  He was active in many fields—in politics, social life, literature, architecture, antiquarianism, printing, virtú; and it is not easy to include them all in the compass of a single volume.”  George Haggerty, who is currently writing a new biography of Horace Walpole, will take up this challenge in his lecture with and through Walpole’s letters. Haggerty asserts that Walpole writes himself into his experience by means of his epistolary imagination.

Professor Haggerty’s talk will be streamed live from the Yale Center for British Art at: https://britishart.yale.edu/multimedia-video/26/5796 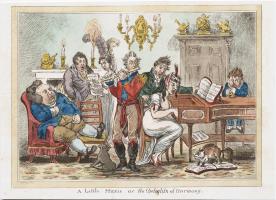 Evening public talk by Amy Dunagin, Postdoctoral Associate, European Studies Council, Yale University, and Managing Editor, Eighteenth-Century Studies, and curator of the exhibition “The Land without Music: Satirizing Song in Eighteenth-Century England” at the Lewis Walpole Library. The talk is presented in collaboration with the Farmington Libraries. 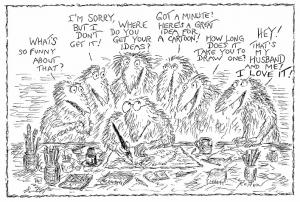 Cartoonist for The New Yorker magazine

Edward Koren’s iconic images record the comedy of manners in society and politics that have captured his attention for decades. In this talk, he will reflect on his career as a New Yorker artist, and on the many and diverse influences that have contributed to the development of his thinking and drawing.

“In my cartoon drawings, I like getting things right… What captures my attention is all the human theater around me. I can never quite believe my luck in stumbling upon riveting minidramas taking place within earshot (and eyeshot), a comedy of manners that seem inexhaustible. And to be always undercover makes my practice of deep noticing more delicious. I can take in all the details as long as I appear inattentive – false moustache and dark glasses in place. All kinds of wonderful moments of comedy happen right under my nose…”
On Cartooning, by Edward Koren

The art of observational satire: a conversation with Rachel Brownstein and Edward Koren 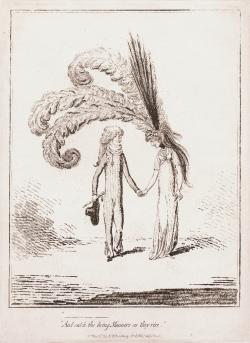 Edward Koren, a long-time cartoonist for The New Yorker, and Rachel Brownstein, a literary scholar, will reflect on the enduring tradition of social satire. 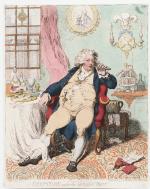 Offered in collaboration with the Farmington Libraries.