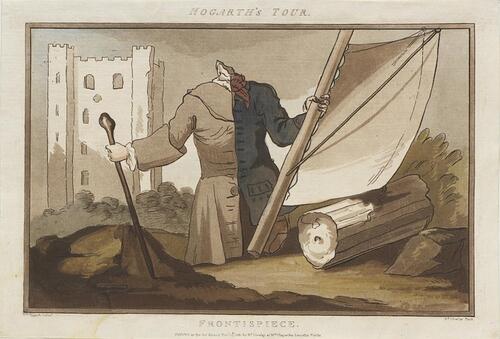 This is an online event and registration is required. Register here.

II. “The Five-Day Peregrination:” a dizzy journey through the topographical history of Kent

Topography is central to William Hogarth’s canonical progress series in which London settings play a decisive narrative role. Lesser-known works by the artist, however, also engage with topographical representation. Pierre Von-Ow’s online exhibition William Hogarth’s Topographies considers the artist’s illustrations of national and colonized geographies beyond the metropole. The county of Kent is the site of a tour undertaken in May 1732 by Hogarth and a group of friends who collectively memorialized the adventure as The Five-Day Peregrination. The exhibition presents the peregrination as both a jesting imitation of the Grand Tour of the landscapes and monuments of Europe and as a satire of the British antiquarians who, since at least the sixteenth century, had minutely inventoried the country’s history and antiquities as a means of reclaiming a glorious past.

Jacqueline Riding and Caroline Patey will discuss the textual and visual representations recorded by Hogarth and his fellow travelers of their tour of Kent, first in manuscript (now in the British Museum) and later published as An Account of What Seemed Most Remarkable in the Five Days Peregrination (1782, etc.). The event seeks to explore the connections between this little-known project and the broader literature of actual and invented travels, as well as the history of Kent and its ties to the global expansion of the British Empire. Dr. Riding has structured her recent biography Hogarth: Life in Progress (2021) with eight interludes that address different aspects of The Peregrination. Dr. Patey is currently working on a translation of The Peregrination into Italian. Riding and Patey will share their thoughts about why the tour of Hogarth and his friends continues to demand attention bringing to this program insights from their recent and current work.

Professor Caroline Patey has studied English and Comparative literature in Paris (Paris III), Dublin UCD and the Università degli Studi, Milan, where she was Chair and Professor of English Literature until 2018. Her interests and fields of research include Renaissance literature, late Victorian culture and Modernism with a special focus on intermediality, the intersection between art, museums and literature and the cross-border circulation of cultures and aesthetic forms. She has edited and co-edited the outcome of various collective explorations of these topics and has published numerous book-length studies on subjects as diverse as Proust and Joyce (1991) Mannerism (1996), Shakespeare and history (1998) and Henry James (2004). Together with Cynthia E. Roman (Yale) and Georges Letissier (Nantes), she has recently co-edited the two volumes of Enduring Presence. William Hogarth’s Afterlives in British and European Culture, (September 2021). Since her retirement in late 2018, Caroline has taught specialist seminars in Italy and Germany (Bard College, Berlin, 2020). She co-directs a collection of critical essays on British and Anglophone literature, Prismi, Classici nel tempo, Mimesis, Milano, and sits on the board of the journal of comparative literature, Letteratura e Letterature.

Dr Jacqueline Riding specializes in British history and art of the long eighteenth century. She is the author of Jacobites: A New History of the ‘45 Rebellion (2016), Peterloo: The Story of the Manchester Massacre (2018) and Hogarth: Life in Progress (2021), which has been awarded the Sunday Times Art Book of the Year 2021 and a Times and Sunday Times Paperback of 2022. Former curator of the Palace of Westminster and director of the Handel House Museum, London, she is a historical adviser on feature films including Mike Leigh’s Mr. Turner (2014) and Peterloo (2018), a consultant for museums and historic buildings including Tate Britain and Historic Royal Palaces, and Books Editor for The Art Newspaper. Jacqueline is a fellow of the Royal Historical Society, the Society of Antiquaries of Scotland, the Paul Mellon Centre for Studies in British Art, the Department of the History of Art, University of York and trustee of the Jacobite Studies Trust and [JMW] Turner’s House, London.

This program is organized by The Lewis Walpole Library in conjunction with the online exhibition “William Hogarth’s Topographies” curated by Pierre Von-Ow, Ph.D. candidate in Yale’s Department of The History of Art.