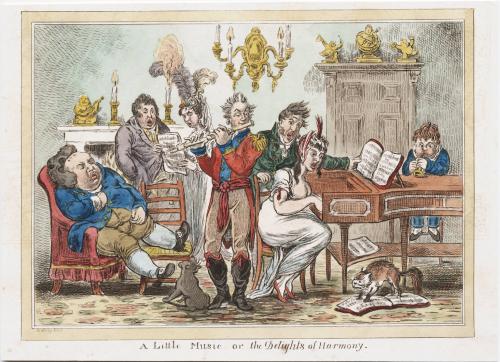 The Land without Music: Satirizing Song in Eighteenth-Century England

Music pervaded public and private spaces in eighteenth- and nineteenth-century England; yet, in 1904, German critic Oscar Adolf Hermann Schmitz, heightening long-standing aspersions, dismissed England as a “land without music.” This unflattering epithet pointed to England’s meager contributions to the western musical canon during the eighteenth and nineteenth centuries—no English Gluck, Mozart, or Verdi; no English operatic or symphonic tradition that could rival those that flourished on the continent.  The English, critics like Schmitz suggested, were importers rather than producers—tasteless consumers and dilettantes rather than discerning, proficient practitioners.  This view did not originate with continental nationalists; in the eighteenth century the English often presented themselves as uniquely unmusical in print and in visual satire.  At once self-effacing and boastful, this representation asserted a national character too sensible, too chaste, too sober to permit the excesses of musical genius.  Bringing together satirical prints and documents pertaining to English music makers and listeners, this exhibition explores English attitudes toward music as lascivious, feminine, foreign, frivolous, and distinctly un-English.