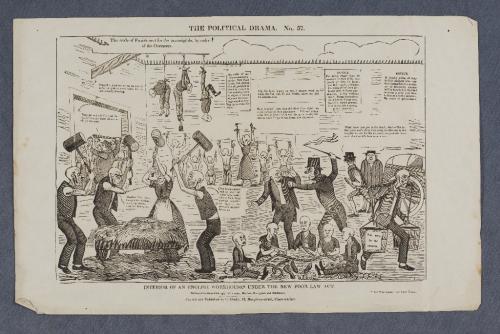 The received wisdom is that the ‘Golden Age’ of British caricature ended with the Reform Bill of 1832 and the Victorian reform of manners and morals. As the novelist Thackeray put it, ‘we have washed, combed, clothed and taught the rogue good manners’. The famous satirical magazine Punch, founded in 1841, is usually regarded as the rebirth of well-behaved and relatively inoffensive visual satire. In fact, the 1830s saw an explosion of different caricature formats as the satirical market adjusted to the growth of the reading (and viewing) public. Far from destroying political caricature, serialization and illustrated journalism made graphic satire available to a much wider audience. At the heart of these developments were two now forgotten publications: Figaro in London, a pioneering penny periodical illustrated by Robert Seymour, and Charles Jameson Grant’s Political Drama, a series of over 100 single print caricatures.

By studying a selection of images from these two series, we will consider how Seymour and Grant re-imagined political caricature in a turbulent decade that began with the French revolution and ended with the rise of Chartism. We will investigate how the shift from metal to stone (lithography) to ‘cheap’ wood engraving enabled the democratization of caricature without losing the spectacular effects of the single-print tradition. Drawing on theories of the everyday, we will also consider caricature’s ability to stage carnivalesque performances which resisted the modernising and commodifying brutalities of emergent Victorian capitalism.

The program is open by application. Preference will be given to graduate students. Please click here to apply.