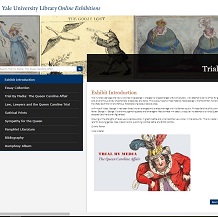 The exhibition Trial by Media: The Queen Caroline Affair, marking the two hundredth anniversary of the trial of Queen Caroline and presented at the Yale Law School Library last autumn, is now available online.

Drawing on the Lewis Walpole Library’s strengths in graphic satire and the Law Library’s collections of trial accounts and illustrated legal texts, Trial by Media documents the media frenzy provoked two centuries ago by the attempt of King George IV of England to divorce his consort Queen Caroline on the grounds of adultery. The items range from mocking caricatures to political screeds and sober, journalistic accounts. Today these sources serve as a lens for studying gender roles, class divisions, publishing, political satire, and British politics.

The online exhibition, which includes the text and images from the fall exhibition, is divided into several sections: Law, Lawyers, and the Queen Caroline Trial; Satirical Prints; Sympathy for the Queen; and Pamphlet Literature. It also includes a bibliography and a digital presentation of the Humphrey Shop Album, the latter filled with satirical prints about the Queen Caroline affair.

To further explore the very complex aesthetic, cultural, legal, and political history around the Queen Caroline affair, the exhibition curators organized a conference, hosted at the Lillian Goldman Law Library, on October 4, 2019, at which a distinguished group of scholars considered how and why Queen Caroline’s affairs inundated the media and contemporary discussion. The new online exhibition incorporates related essays by these scholars, as well as others, exploring the legal and public aspects of the Queen Caroline affair. Most of the essayists have been researchers or fellows at the Lewis Walpole Library. In the list below, former LWL Fellows are indicated by an asterisk (*).

Papers by most of the speakers are revised and presented here together with additional scholarly contributions.

William Anthony Hay*, Mississippi State University, Robert Cruikshank, A Scene in the New Farce of the Lady and the Devil, June 1820

Ryan Martins, Yale Law School, The Legal Legacy of the Queen’s Trial: The Rise and Fall of Caroline’s Rule

Kristin Samuelian, George Mason University, Looking at the Case against Her: Intertextuality in Queen Caroline Prints