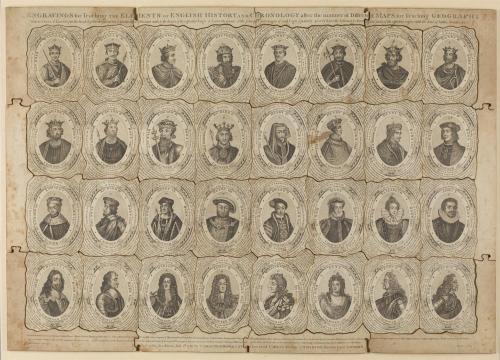 During her stay, one of our summer fellows, Isabelle Baudino, had the chance to view a recently discovered puzzle that belonged to the Lewises’. She kindly wrote a brief essay on the puzzle and its origins. For more information about the puzzle, please see the Catalog Record.

One may not primarily come to consult the invaluable treasures held in the collection at the Lewis Walpole Library in search of games. Yet, alongside voluminous history books, there is a rare copy of one of the earliest pedagogical jigsaws designed to help children learn British history. Entitled, Engravings for teaching the elements of English history and chronology after the manner of Dissected maps for teaching geography, it is kept in its original box, and comprises 42 wooden pieces: 10 that constitute the frame and 32 - printed with the portrait of a king, ruler or queen of England, or Great Britain, from William I to George II - that are to be arranged in four rows. Each piece is the shape of an irregular rectangle, with different contours but a similar structural design: an oval portrait of the ruler is placed in the middle, surrounded by a first oval frame bearing his or her name, dates of birth, death and rule. It is surrounded by a second oval frame with names of famous persons, contemporaries of the ruler, separated by decorative garlands. Then, in the four corners, memorable events of the reign are recorded.

As indicated in the directions below the title, the medallions, frames and corners correspond to four successive stages in the learning process. Whereas other historical textbooks, such as John Lockman’s popular History of England by Question and Answer (1729) already included illustrations, this jigsaw relies more heavily on the visualization of history. As indicated in the title, it was inspired by the puzzle (or dissected) maps created twenty years earlier by John Spilsbury, such as his Europe Divided into its Kingdoms (1767) in which the elements were cut following the geographical boundaries of the different kingdoms. Establishing a parallel between history and geography, the jigsaw maps out nearly seven hundred years of British history in the manner of a territory the youth were encouraged to survey mentally, picturing the different characters and events in order to memorize the chronology.

Designed by schoolmaster John Hewlett (1762-1844), and engraved by William Darton (1755-1819), who specialised in educational books, this sophisticated teaching aid borrowed from the most popular historical illustrations of the eighteenth century, i.e from George Vertue’s Heads of the Kings of England, proper for Mr. Rapin’s History (1736). Indeed 24 out of the 32 portraits in the medallions are copied (and thus reversed) from Vertue’s engravings. Being much smaller, they are also simplified versions of the luxurious engravings owned by Horace Walpole and coveted by Georgian collectors. They show how the individual likenesses of English rulers drawn by Vertue had become part of a potent national imagery that was circulated among ever larger sections of the British population.