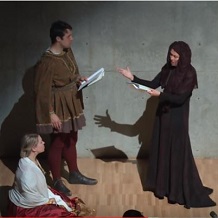 The final event for the year-long Walpolooza celebration  featured a staged reading of and mini-conference on Walpole’s play The Mysterious Mother.
On May 2nd, an enthusiastic audience filled the lecture hall at the Yale Center for British Art for the first known north-American performance of Horace Walpole’s The Mysterious Mother (1768). Walpole’s play is a gothic dramatic counterpart to his more famous gothic novel, The Castle of Otranto (1764). This under-appreciated tragedy of incest and intrigue was initially circulated only among the author’s friends. Walpole never permitted it to be performed during his lifetime except as a private theatrical event.

Our staged reading was directed by Misty G. Anderson, Lindsay Young Professor of English, University of Tennessee, based on an abridged script by David Worrall, Emeritus Professor of English at Nottingham Trent University. The titular lead was played by Georgina Lock, Senior Lecturer, School of Arts & Humanities, Nottingham Trent University who we have determined was only the fourth to play the countess. Other actors were drawn mainly from alumn of the library’s fellowship program together with other Yale-affiliated students and scholars: Dale Townshend, Professor of Gothic Studies, Manchester Metropolitan University played Peter, the Porter; Chelsea Phillips, Assistant Professor of Theater, Villanova University played, Adeliza; Count Edmund and his friend Florian were played by Carlos Guanche, Yale TC ’20 and Gilberto Saenz, Yale ES ’19; the Friars Benedict and Martin were played by Charlie Gillespie, Doctoral Candidate in Religious Studies, University of Virginia and Justin Crisp, Doctoral Candidate in Religious Studies, Yale University; the Servant was played by Stephen Clarke, Independent Scholar and Board of Managers, The Lewis Walpole Library. Jill Campbell read the Prologue and Misty Anderson read the Epilogue which Walpole had written for the actress Kitty Clive. The extraordinary renaissance period costumes, chosen in keeping with the celebrated illustrations by Walpole’s friend Lady Diana Beauclerk, came from Hartford Stage and the Goodspeed Opera, including the stunning purple costume worn by Gilberto as Florian which had been worn by Nathan Lane. The mood-evoking digital set was designed by Alice Trent, Candidate for Master of Fine Arts in Lighting Design, University of Tennessee. 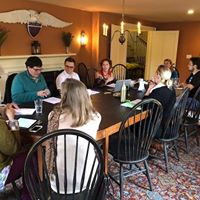 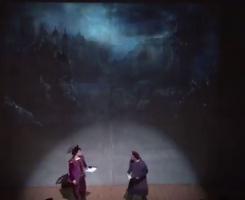 The cast gathered with Misty at the library in Farmington for two short days of intense rehearsal culminating in a performance that was a resounding success. It was both highly engaging as entertainment and tremendously revelatory on the complexities of the stage-ability of The Mysterious Mother and more generally for performance scholarship.

Catherine Sheehy, Professor of the Practice of Dramaturgy and Dramatic Criticism, Yale University, lead a lively talk back with actors and the audience following the performance. 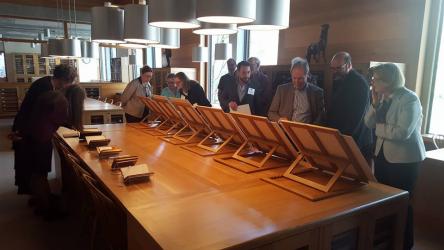