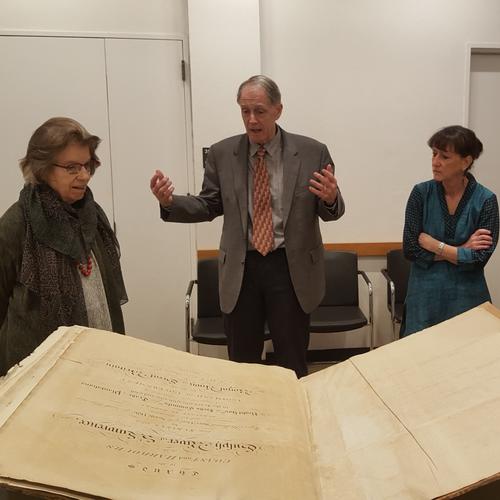 In January the Lewis Walpole Library sponsored the first of an ongoing series of workshops that will focus on the topographical view. The program will prioritize close looking in the special collections at Yale University Museums and Libraries where collecting topographical material has a long tradition. Led by Cynthia Roman, the workshops are a collaboration with curators, librarians, faculty and students from Yale University and beyond.

We define topography as a pictorial description of a specific place in a wide array of media and forms with a diversity of functions and audiences. Building on an understanding that in addition to capturing useful information, the specificity of place can evoke elements of recognition and association or function as official evidence. We will consider categories of topographical views ranging from maps to aestheticized landscapes. Discussions will be expansive across chronology and global geography.

A second workshop met May 6th at Beinecke Library began with a hands-on session with George Miles, Curator, Western Americana Collection, who shared amazing riches selected from the collections he stewards together with his vast knowledge and enthusiasm. Close looking with these extraordinary collections allowed us to consider connections between utility and materiality.

Following a lunch break, Patricia Mainardi, Professor Emeritus, CUNY, moderated group discussion around questions of accuracy and functionality of topographical views as visual records of place, and the ways they are inflected by a variety of approaches and mediations in the spectrum between science (data) and art (aesthetics). Discussants raised many potential topics for further inquiry.

Plans are underway for programs in for fall 2019 and beyond, including canonical British topographical views and well as trans-global topography that will explore Anglo practices with indigenous practices around the world.