The academic year 2017/18 was a banner year for the Lewis Walpole Library. We celebrated the tercentenary of Walpole’s birth with an array of well-received scholarly programs and public events in Farmington, New Haven, and in the UK, beginning with a festive Walpole 2017 birthday celebration at Strawberry Hill House, and concluding the academic year with a highly successful staged reading of Walpole’s controversial drama, The Mysterious Mother. Topping off our contributions to Walpole Tercentenary commemorations, in October, Library representatives, joined forty other lenders plus Strawberry Hill curators, Trustees and supporters to celebrate the opening of Lost Treasures of Strawberry Hill: Masterpieces from Horace Walpole’s Collection, which closed on February 24th after a hugely successful run that attracted over 25,000 visitors.

By comparison, to the casual observer of the Library’s 2018/19 events calendar, it might seem that the Library is taking a bit of a vacation.  But nothing could be further from the truth.  Last June, in partnership with the Yale Office of Facilities, Knight Architecture, Petra Construction Corp., and FX Design Inc., the Library launched a long-awaited refurbishment of the original Lewis residence, the Major General Solomon Cowles House (1784), inspired by the intent of Wilmarth and Annie Burr Lewis that their Farmington home serve as an ongoing Yale center for the study of the eighteenth century, enriched and sustained by their growing, internationally recognized research collection built around the theme of Horace Walpole and his times. 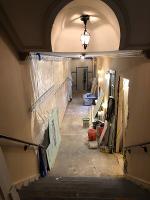 The Cowles House project entails crucial life-safety and ADA-accessibility enhancements in the 18th-century house and adjacent 20th-century Lewis extension, including air conditioning and a fire suppression system; refurbishment of the existing heating system and a much-needed upgrade of the electrical infrastructure;

installation of an ADA-compliant lift to enable all visitors to enjoy the public spaces on the ground floor of the Cowles house; and, a comprehensive upgrade of the security monitoring system. Last, but not least, restoration specialists skilled in the cleaning, repair and maintenance of historic carpentry and plaster are attending to the needs of the building’s elegant 18th-century interior paneling & crown moldings, and to its lath-and-plaster walls.

Once completed, the refurbished Cowles House will feature public rooms on the ground level as an extension of existing public spaces elsewhere in the north wing of the Library complex. The three upstairs bedrooms will become a small conference room and two scholar’s studies, supporting our highly successful residential Fellowship program, as well as an expanding agenda of Library-sponsored workshops, lectures, and scholarly symposia. Rooms throughout the Cowles house will feature historic, Lewis-era furnishings.  Refurbished spaces on the ground floor of the Lewis extension will provide enhanced locker space for Library visitors & staff, and an ADA-accessible restroom. Rooms on the second floor will provide a flexible, shared workspace for staff, and much needed storage space.

While our research services, reading room operations, and general curatorial and collections stewardship activities (acquisitions, cataloging, digitization, conservation, etc.), have been sustained with little or no interruption throughout construction, the Cowles project has necessitated a curtailment of onsite programming for this entire academic year. Our exhibition gallery

While major construction work is due to wrap up by the end of April, several busy months of work will remain for the Library and its design partners, to refurnish the Cowles House, adapt reconfigured spaces in the Lewis addition to their intended use, and prepare for the September opening of Rescuing Horace Walpole: The Achievement of W. S. Lewis, a tribute exhibition to mark the 40th anniversary of Wilmarth Lewis’s bequest to Yale of the Lewis Walpole Library.  We hope to see you then!