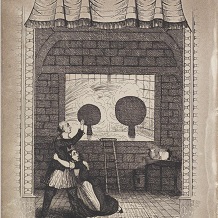 When the COVID-19 pandemic suddenly caused the Lewis Walpole Library staff to begin working from home in mid-March, some quick figuring was called for. Archivist Sandra Markham, who is usually wrestling with linear feet of paper in boxes on tables, suddenly shifted to wrestling hundreds of data cells in spreadsheets on a computer screen in her living room. Like all peer institutions, the Library has legacy data on its archival collections, compiled in various ways over many years, that needs to be updated and codified before it can be displayed in Archives at Yale, the university library’s database of record for archival collections. That legacy data presented perfect project possibilities for working from home.

Even more perfect would be to find material that had already been digitized for a patron but those images had never been offered to the public online, and just needed metadata enhancement to bring the description up to par for Archives at Yale. Technical Services Head Ellen Cordes presented Sandra with a collection that could be worked on from at home, as well as actually seen from home: a group of 660 small theatrical scenes that had been removed from books (before entering the Library!) and were known as the Collection of 18th-century British Theatrical Prints. The digital images were stored on a library server that the staff could easily access remotely, making further description possible from any living room.

The prints were arranged alphabetically by title of the play—except for works by Shakespeare which were filed as a separate group—and at the end were filed a batch of unidentified theatrical scenes. All had been listed in an excel spreadsheet, so the existing data was portable and easily manipulated. An examination of the list revealed that no authors, save Shakespeare, had been recorded, nor had the names of printers or publishers, though all three of those categories are important to Lewis Walpole Library patrons.

After making a survey of the existing information, Sandra created a processing proposal for the staff to consider: research the literary pieces to determine the author and correct title for each work illustrated; enhance the description of each image to pull in artists, printers, and publishers; and then file the prints by author and under each author by title. Once that suggestion was accepted, she broke the project into components and enlisted the help of her two Technical Services colleagues, Eileen Horansky and Scott Poglitsch.

Eileen took on researching the authors and full titles of the plays, some of which turned out not to be theatrical works at all, but simply short stories. Scott was in charge of the physical description of each print which, in addition to accurately transcribing all information appearing on each impression, included finding universally authorized names for the artists, printers, and publishers to ensure they would be cataloged correctly (another essay could be written just on librarians’ controlled vocabularies). His discovery was that many of the prints were not, in fact, published in the eighteenth century, but instead in the nineteenth. This painstaking—some might say tedious—work was accomplished over the summer, and when finished it enabled a whole new spreadsheet to be developed, with the collection now arranged in a logical intellectual order. Four steps remained before the collection was fit to appear in Archives at Yale: rehousing the prints so their physical order would match the intellectual, and new permanent box and folder numbers could be assigned; uploading the spreadsheet to ArchivesSpace, the backend database behind Archives at Yale; uploading the digital images and their associated metadata into LadyBird, the backend platform behind the library’s Digital Collections system; and adding the relevant digital image links from LadyBird to their matching metadata components in ArchivesSpace.

When the Library reopened in September, the collection was rehoused by Scott and read through for a final time by Sandra. After she uploaded the newly revised spreadsheet, Mark Custer, Yale Library’s guru of all things ArchivesSpace, exported specific data points that were required by Sarah Coe, Yale Library’s expert in loading data and images to LadyBird. Mark passed his new spreadsheet to Sarah, who worked her magic to create the links that Mark then was able to load back into ArchivesSpace and voilà! A finding aid was born for the renamed collection of British Theatrical and Literary Prints. Patrons are now able to search in Archives at Yale for a playwright, title, artist, printmaker, or publisher, then click on a link to see an image of the print. And when the Lewis Walpole Library opens again to the public, patrons can easily request online a box and folder to examine in person a small piece of theatrical (or literary) history.