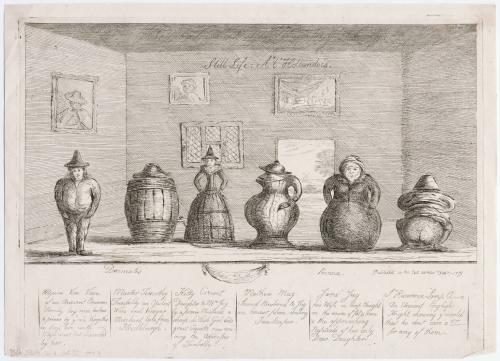 The anonymous 1779 etching, Still Life: a’ l’Hollandois, offers a complex visual critique of Dutch character and culture.  Unlike more typical visual caricatures of the Dutch, in which artists portrayed them as either frogs or as fat and dumpily dressed drunkards who wait in cowardice as other nations act 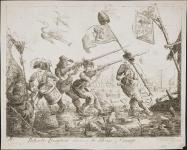 [for an example of the Dutch as frogs, see James Sayers’, Patriotic Burghers attacking the House of Orange, 1787.  For the Dutch as simply-dressed cowards with a propensity for drink, see James Gillray’s, John Bull Triumphant, 1780, ], the artist of this scene parodies them in a subtler fashion by employing two significant material culture markers of Dutch pride and identity— 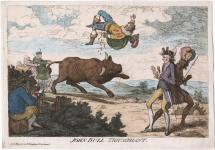 Dutch genre painting of the seventeenth century and Delftware, the ubiquitous blue and white earthenware pottery that the Dutch marketed as a fashionable alternative to Chinese porcelain—against them.  [for an example of Delftware, see the Het Jonge Moriaanschooft vase, ca. 1680-1690 at the Rijksmuseum. 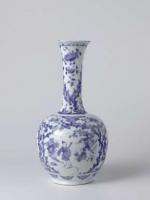 The artist of this work brings viewers to a stage.  In this case, that stage is the interior of an early modern Dutch household, which is signaled by its casement window in the background and by the painted portraits and landscapes on its walls.  Only unlike the interior scenes painted by seventeenth-century artists such as Delft-based Johannes Vermeer, whose works celebrated the Dutch “Golden Age” in their intimate but also elegant portrayals of the simple daily rituals of the Dutch commercial class [see, for example, Johannes Vermeer, The Milk Maid, ca. 1660 at the Rijksmuseum,] 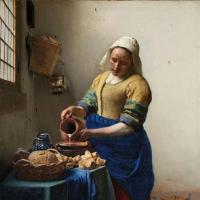 the scene here is wholly different.  Here, an extended Dutch family, brought to life as five pieces of Delftware, faces a dilemma.  Jane Jug, (second from right) the overweight and unattractive wife of Mathew Mug, her second husband (in the middle), contemplate “the approaching nuptials” of her daughter, the “sharp skittish Girl and great Coquette,” Kitty Crewet (third from left) to either Mynheer Van Vase (far left), the son of “an Ancient Etruscan Family long since broken to pieces by ye vile Visigoths,” who has nothing to offer her but love, or to Master Timothy Tunbelly, a wealthy wine merchant and recent arrival from Heidelberg, Germany, whose fat rotund belly (literally a “tunbelly”) and outsider status is signaled by his personification as a wine barrel, rather than a piece of Delftware (he’s second from the left).  With choice as its theme, the question the etching implicitly asks is: who will Miss Kitty choose?  Although the answer remains uncertain, the artist nonetheless offers his own response in the persona of Sir Reverence Lamp A__e [Asse?], an “Ancient English Knight,” who bares his behind to viewers as a way of “shewing ye world that he don’t care a F____ for any of them.”

Etched as this scene was in 1779, an auspicious year during Britain’s war with its American colonies, this print expresses both Britain’s uncertainty about the fate of this war and its “thumb-your-nose-at-them” attitude towards those other European nations who were willing to oppose them in supporting the American cause.  With France, Britain’s primary enemy, having allied themselves with the Americans by declaring war on Great Britain in 1778, and Spain having joined them in the year this print was produced, the British knew that this colonial rebellion had suddenly become a much bigger war with potentially global ramifications.  But still, the Dutch, their Protestant neighbors in Europe, remained undecided, which greatly frustrated and even angered the British.  The Dutch West India Company, Britain knew, had been actively supplying Americans with arms and ammunitions from St. Eustatius in the Caribbean since the start of the war; Amsterdam merchants had also become heavily invested in trading naval stores with the French.  Nonetheless, many in Britain still hoped (falsely) that a bit of bullying would bring the Dutch into line.  This print thus effectively captures the mood of time by expressing the growing sense of British impatience with the Dutch in 1779.  By British reckoning, the Dutch had an important choice to make regarding their alliances.  And thus, whom the skittish Kitty Crewet chose to marry was important one, even if Britain, embodied as the English Knight Sir Lamp A__e was prepared to bare his naked bottom at the world in disdain.

Yet this etching is intriguing also for the ways it implies that more was at stake here than the Dutch alliances during the American Revolution.  Rather, as the artist’s sophisticated use of Dutch material culture implies, British resentment of the Dutch ran deep.  As long-time political and commercial rivals of the Dutch and as their enemies during several seventeenth and eighteenth century wars against them, the British simultaneously admired and despised their Protestant neighbors.   The Dutch, it seemed to many in Britain, had enjoyed remarkable wealth and commercial success, especially during the seventeenth century.  Yet they had paid relatively little for their considerable gains.  While England and then Great Britain pursued wealth and trade through the costly mechanisms of war and aggressive regulation of goods and markets, the Dutch had grown rich without having to wage costly conquests on the continent.  To the British, then, Dutch wealth and success had come cheap—too cheap.  British visual satirists, like this one, thus aimed to explain and devalue such achievement by revealing a darker Dutch underbelly, one tainted by barbarian Visigoths, contaminated by greedy wine merchants from Heidelberg, and crippled by ugly, fat women and sharp skittish girls.  The Dutch, in short, were frauds—and British visual satirists wanted the world to know it.